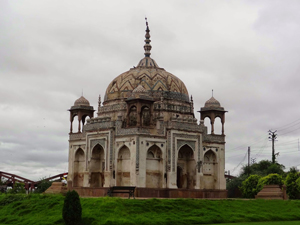 Located at a distance of about 6 km from Cantt. Railway station, near Rajghat Bridge, Rajghat, Varanasi, U.P Though Varanasi is a famous and holy city for the Hindus, this place also boasts of a few tombs and mausoleums built during the Muslim reign. Tomb of Lal Khan, Varanasi is one such site which is classified under the category of Muslim Monuments in Varanasi. It is characterized by a monument of Islamic architecture.

Inside the ancient Raj Ghat fort (now dismantled) is the Tomb of Lal Khan, built in 1773 A.D. It occupies the centre of a large rectangular court with a tower at each corner and is a massive domed structure ornamented with coloured tiling. The influence of Mughal period is clearly visible in the architecture of this tomb. The presence of pattern like kiosks at all corners of the roof or the treatment for the pillars and walls everything has a splendor of its own, reminiscent of a past era.