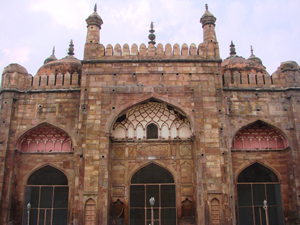 The Dharhara mosque is situated on the left side of the holy river Ganga at a distance of about 6 km towards east from the Varanasi Cantt Railaway station. It is an example of Hindu-Mughal style of architecture. Dharhara Masjid at Panch Ganga Ghat can easily be approached from the river front side by a boat from Dashashvamedh Ghat. This monument is locally called as Madhodas Ka Dharhara. It is said that the foundation of this building is as deep as the height of this building. This mosque was constructed in the site of a famous ancient temple of Vishnu, Known as Vishnu Madhava, of the 12th Century (Gahadavala period).

The Mughal Emperor Aurangzeb (1663-1712 A.D.) demolished it in 1673 and the upper portion was converted into a mosque. Emperor Shah Alam (1707-1712 A.D.) completed the present structure under the supervision of Ali Ibrahim Khan, a military officer of Banaras. It is an odd mixture of Hindu and Mughal style of Architecture. There were two minarets about 64 mt. high. In October 1949 one of the minarets collapsed and as the other was also weak, it was pulled down to a matching height.