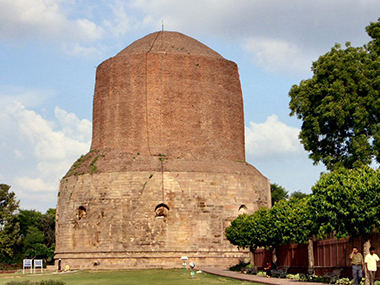 Sarnath site is situated at a distance of about 13 km north-east from the Varanasi Cantt. Railaway station. Sarnath is one of the four most sacred places of the Buddhist. According to the ‘Mahaparinirbbana Sutto’ Buddha himself told his disciples to visit four places-Lumbini, Bodhgaya, Sarnath and Kushinagar which were associated with his birth, enlightenment, first preaching and decease respectively. The modern name Sarnath seems to be a contraction of Sarangnath still born by the lord Shiva enshrined in a temple nearby. Sarnath is also sacred to the Jainas for being the value of austerities and death of Sreyamsnath, the eleventh Tirthankara. After attaining enlightenment Buddha, delivered his first sermon at Sarnath to five monks (i.e. Kaundinya, Vappa, Bhadriya, Mahanama and Asvajit) for redeeming humanity. This place is also significant for the foundation of new order of monks (Sangha) and a new religion.

The history of this place is covered with a veil of obscurity for a period of three centuries. After Buddha, Ashoka (273-32 B.C.) the great Mauryan Emperor raised several monuments at this place including Dharmarajika Stupa and monolithic pillar surmounted by the lion capital. Archaeological excavations of the site have brought to light many carved railing pillars ascribable to the Sunga period (second- first century B.C.)

Several structures including Mulgandh Kuti and Dhamekh-Stupa are the best preserved and most impressive edifices at Sarnath. Harsh Vardhana (606-47 A.D.) must have initiated fresh religious activities and restoration of the earlier building at this place. Hiuen-Tsang visited this place during his time. Kumara Devi, wife of Govinda Chandra (1114-1154 A.D.) of the Gahadavalas dynasty built a large monastery i.e. Dharmachakra-Jina Vihara at Sarnath, which is probably the last impressive monument raised here and after which the architectural and artistic activities came to a halt. In 1798 A.D. Mr. Duncan the then commissioner of Benaras gone on account of a casket of green marble inside a stone box exposed by the workmen of Jagat Singh, Dewan of Raja Chet Singh of Banaras while dismantling the Dhararajika Stupa in order to procure building materials in 1794 A.D.